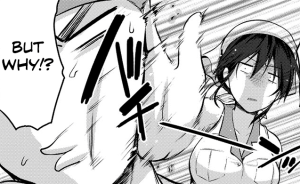 Meguru and her husband Kouichi run a restaurant. To outside observers, Meguru wears the pants in the relationship, but things are quite different when the shop is closed and they’re by themselves.

This is slightly old news, but I figured in case people didn’t know, the artist “lunch” has finally resurfaced after many years of hiatus!

It looks like their art has improved. It’s too early (and perhaps too hopeful) to say if they’ll return to drawing h-manga again, but at least the possibility exists. 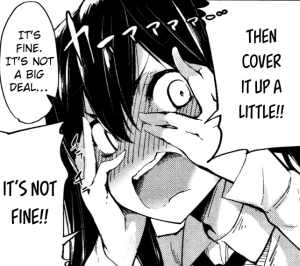 Akane wakes up her boyfriend Kouji every morning because he sleeps in, but on this occasion his morning glory needs to be taken care of.

Warning: This story contains some sex that is arguably forced and not entirely consensual. For this reason, I wasn’t completely sure if it should’ve been a Team Koinaka release; it’s a borderline case. If you feel you will be bothered by that, then perhaps you may wish to skip this release. Thanks for your attention.

I’ve long liked Z-ton’s slender girls, and it was cool to see them do something a bit more “normal” this time i.e. non-monster girls.

FAKKU recently announced that they picked up COMIC KOH for their subscription service. This news somewhat hit me by surprise, because I thought something like this would happen during an event like Anime Expo, such as when they announced they had picked up BAVEL, Europa, and Girls forM last year.

But I can’t say I’m completely surprised. As I wrote last year, once they’d spread beyond WANIMAGAZINE, it was only a matter of time until they picked up another magazine, and my first prediction happened to be correct.

Now I was a bit dramatic when I said BAVEL’s acquisition was a huge blow to the scene, but this news means we will no longer work on COMIC KOH works moving forward. Fortunately, we didn’t have any current projects from COMIC KOH, and surprisingly there was only one KOH work in our potential projects list. It was a magazine I used to look forward to the most, like back in 2015, but I haven’t been excited by their lineups in quite a while.

So I guess we’ll chug on with the noose a little tighter than before. Now that KOH has fallen, what comes next: Anthurium, ExE, or possibly HOTMiLK? We can only wait and see.

A quirky girl named Shizuka has taken an interest in her underclassman Mizoguchi, but with her graduation fast approaching, it seems unlikely they’ll take their relationship to a more intimate level.

Apologies to RedHot80 and Manny, who both requested this story. It took nearly three years, but I finally got around to it.

Koyuki and her older brother are in love with each other, but know that entering a relationship would bring hardship to their lives. Nevertheless, they work toward a future where they can be together.

Unlike Aoki Kanji’s other brother-sister incest works, this one stands out as taking the subject matter more seriously. Nevertheless, I hope you enjoy it! (If anyone is able to acquire better raws for Aoki Kanji’s COMIC Grape Vol.50 story, please let us know. I’d love to work on it, but I think we’ll have to pass on such low quality.)

Come talk to us on Discord!